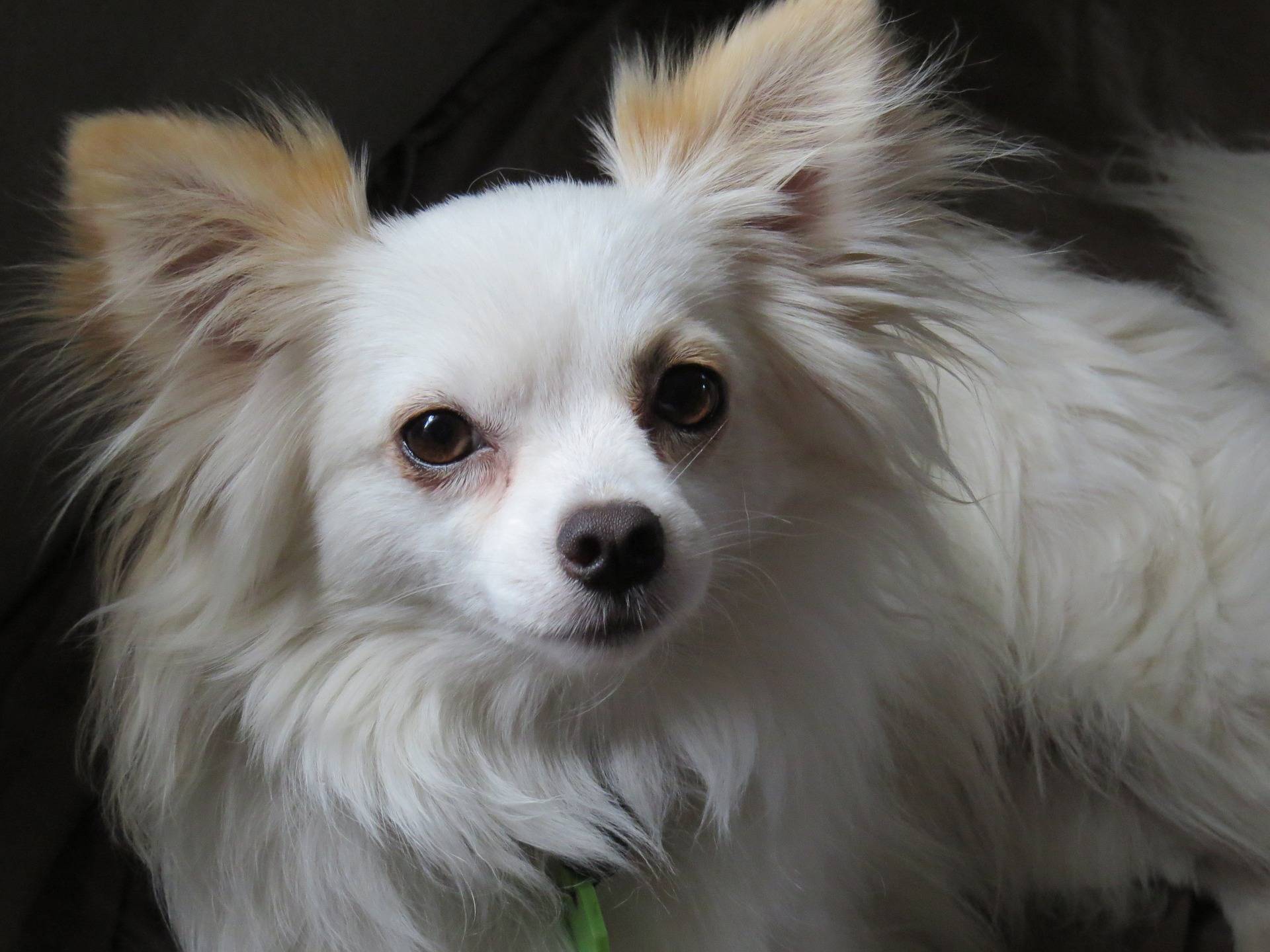 As an ancient breed, the Chihuahua tends to stay out of the spotlight - especially as Designer Breeds become more and more popular! But, do not let their tiny bodies fool you. They are anything but paltry. With their beautiful coats and amazingly loyal personalities, Chihuahuas make the perfect lap-companions. And, the Long-Haired Chihuahua is certainly making a big comeback!

Seemingly unaware of their size, they are often the most sassy and fierce pup of their pack! And not afraid to show anyone who is boss, Chihuahuas do best with consistent training from a patient and steadfast owner.

Are you wondering what distinguishes a fluffy Long-Haired Chi pup from his Short-Haired counterpart? Read on to find out everything you need to know about the Long-Haired Chihuahua before you get one!

P.S. If you want to see more long-haired chihuahuas, stories of pets, or share your pet's story check out our free Facebook group. 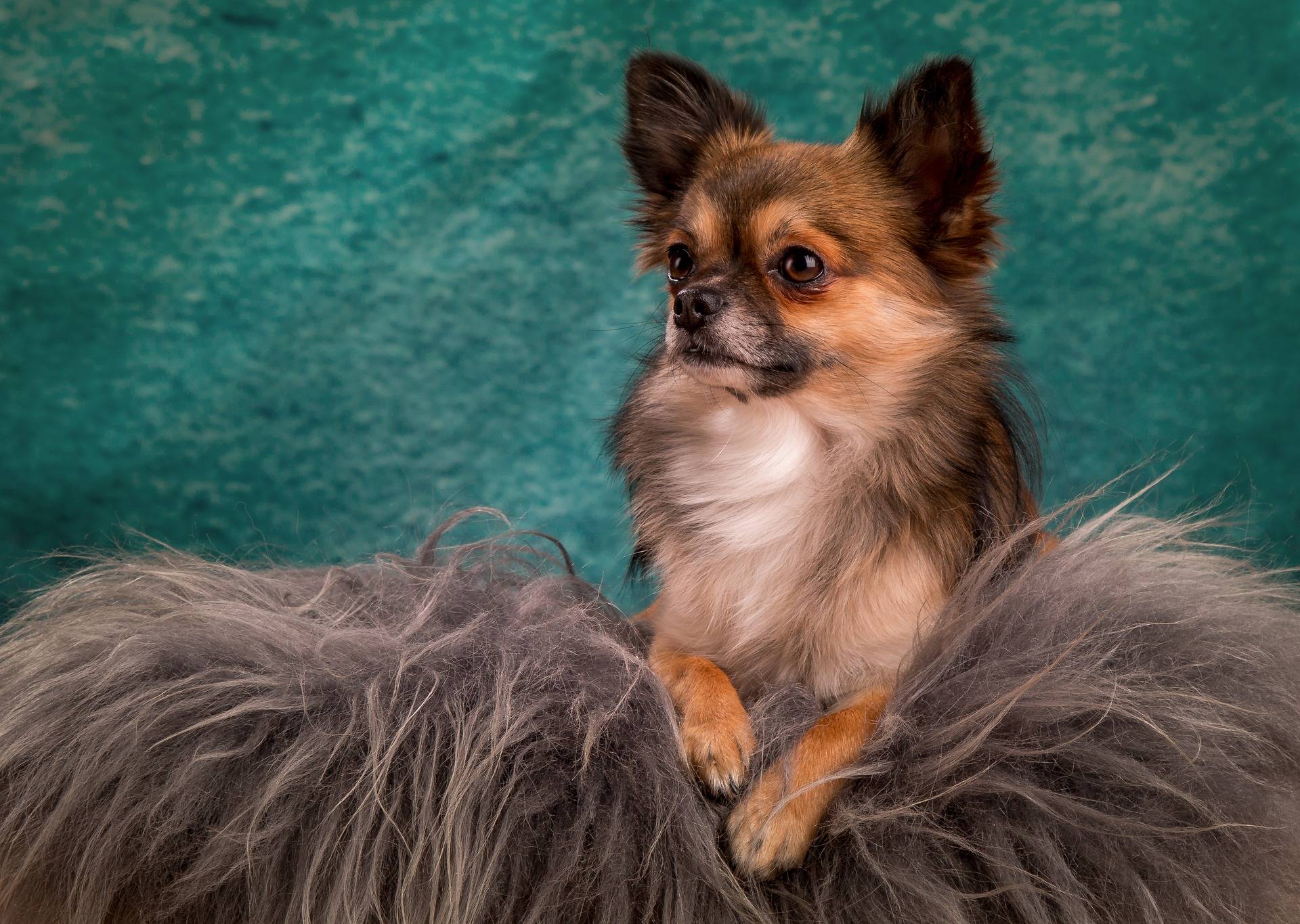 Because these pups are named after Chihuahua, a state in Mexico, most assume that they originate there. However, evidence suggests that the tiny little lap-dogs have deep roots. They actually date as far back as about 100 AD. And, their ancient ancestor, the Techichi dog of pre-Columbian Mesoamerica, reaches back even further. Archaeologists have discovered carved figurines that closely resemble the Techichi dating back to 300 BC!

Though they were adored for their companionship and believed to be guardians of the afterlife, in those days, the Techichis and eventually the Chihuahuas, were bred mostly for two purposes: hunting and eliminating bothersome vermin, and...to be eaten. Yikes!

Years later, in the 1800s, Chihuahuas found their way to America. However, it was not until 1904 that they became registered with the American Kennel Club (AKC). They quickly became a favorite purse dog with the popularity of Paris Hilton, and the 2001 premiere of Legally Blonde.

Taco Bell even deemed Gidget The Chihuahua their official mascot from 1997 to 2000 - producing thousands of plush Chis, to be given away with their spicy combos! 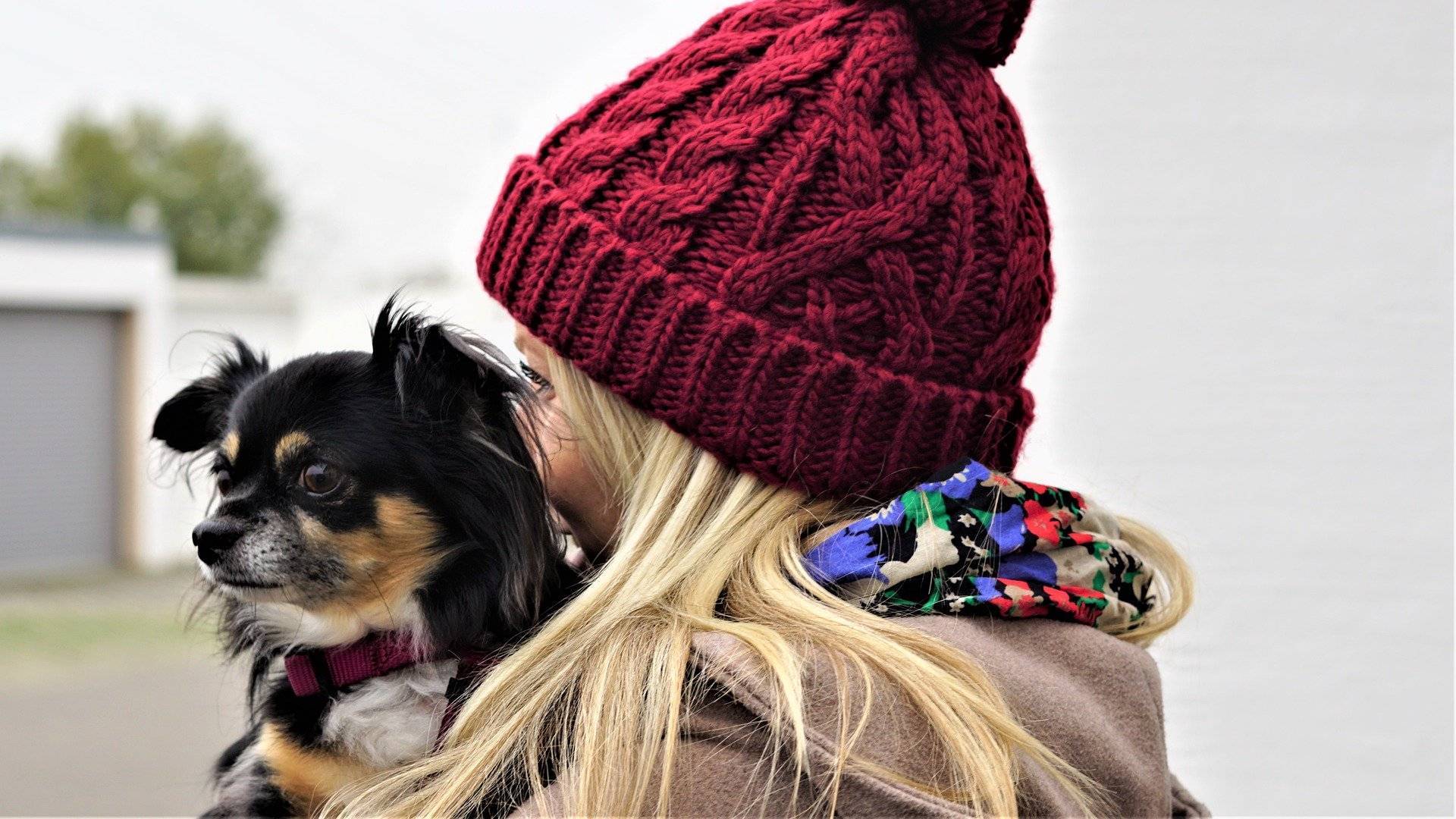 In this section, we will walk you through price, temperament, and everything in between! By the end, you’ll know if the Long-Haired Chihuahua is the perfect pup for you.

Price: How Much Does a Long-Haired Chihuahua Really Cost?

Unfortunately, the beauty and popularity of Long-Haired Chis have made them a favorite of backyard breeders and puppy mills who exploit the dogs for their own financial gain.

But don’t worry. With the proper research, you can find a reputable breeder who may charge you between $500 and $1500 for your Chihuahua. Or, you can rescue a Long-Haired Chihuahua from a local organization and rest well knowing you saved a life without supporting a puppy mill!

Health: Caring for Your Chihuahua

As with most toy breeds, Chihuahuas have certain health risks due to their size. For example, they may develop low blood sugar, also known as hypoglycemia, because their muscles are too small to hold enough energy. You can manage it by feeding your Long-Haired Chihuahua small, frequent meals made up of a high-quality food, specifically formulated for tiny breeds.

Chihuahuas also have very soft bones, especially in their lower jaw. Your Long-Haired Chi will need regular dental exams and cleanings to make sure his tooth and bone health is in tip-top shape. 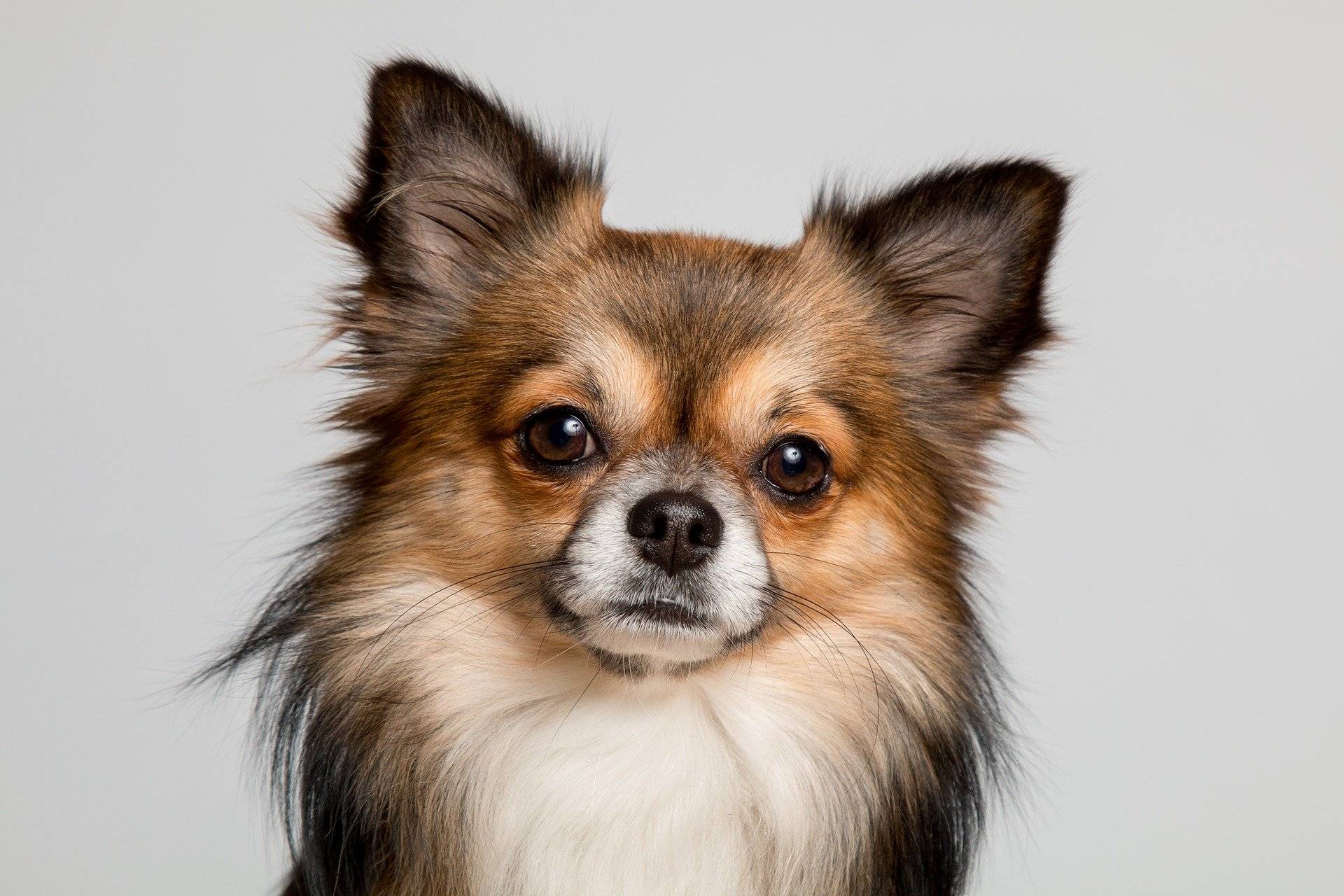 As previously mentioned, Chis are known for their feisty personalities. This means your Chihuahua will need extensive social training from a young age to learn when their sassiness is acceptable, and when it’s not.

Though the Long-Haired Chihuahua is quite intelligent, he can be very stubborn. Chis love to be the center of attention and sole object of your affections! Your new pup will do best in a home without small children, and he’ll thrive when clear boundaries are in place.

Families who fail to set and enforce consistent boundaries may find themselves with a Long-Haired Chihuahua that suffers from Small Dog Syndrome - a behavioral nightmare characterized by growling, excessive barking, jumping, and general aggression. Unfortunately, this is why many Chihuahuas are rehomed or surrendered to shelters.

When training your Chihuahua, use verbal praise and lots of petting. Long-Haired Chihuahuas love attention and thrive on touch, cuddles, and love. You can also use small training treats if you notice that your Chi is food motivated. Just be sure to account for the extra calories! Because they are so small, it is easy for them to gain unhealthy weight. 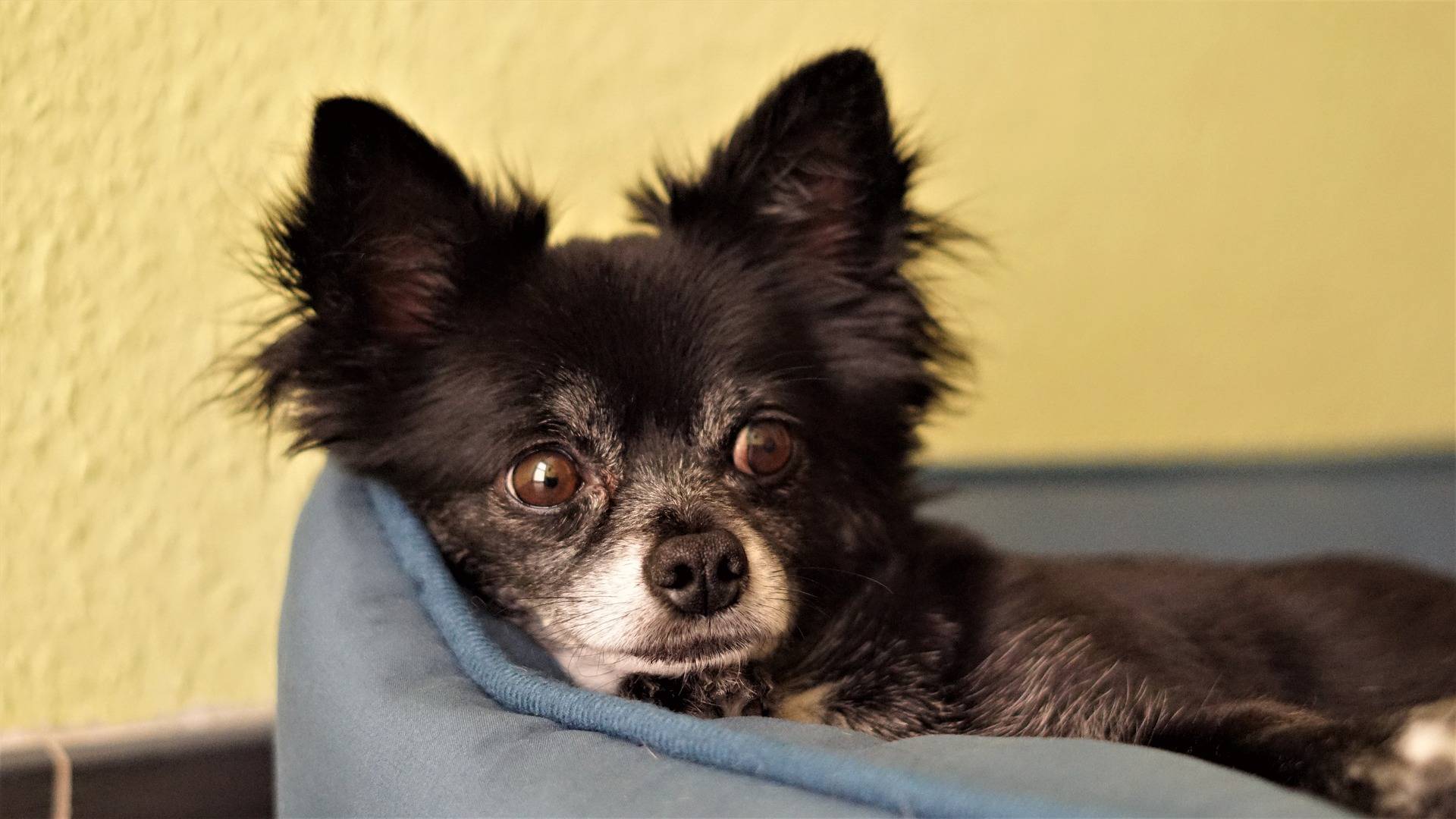 Activity Levels: How Much Exercise Do Chihuahuas Need?

A favorite of city-dwellers, the Long-Haired Chihuahua does great in small spaces. They are the perfect apartment dog, as they do not require wide yards to run and roam. However, Chis do require at least 20 to 30 minutes a day of exercise. Two 10 to 15 minute walks each day, and you’ll have a very happy Chihuahua!

Because they have a strong urge to protect and chase, walking your Chi on a leash is safest. And, because they are so tiny, they’re more prone to tracheal collapse than big dogs. This medical emergency may occur when your Chihuahua pulls on their leash while wearing a collar. The collar puts too much pressure on the throat. Instead, try a comfortable harness! 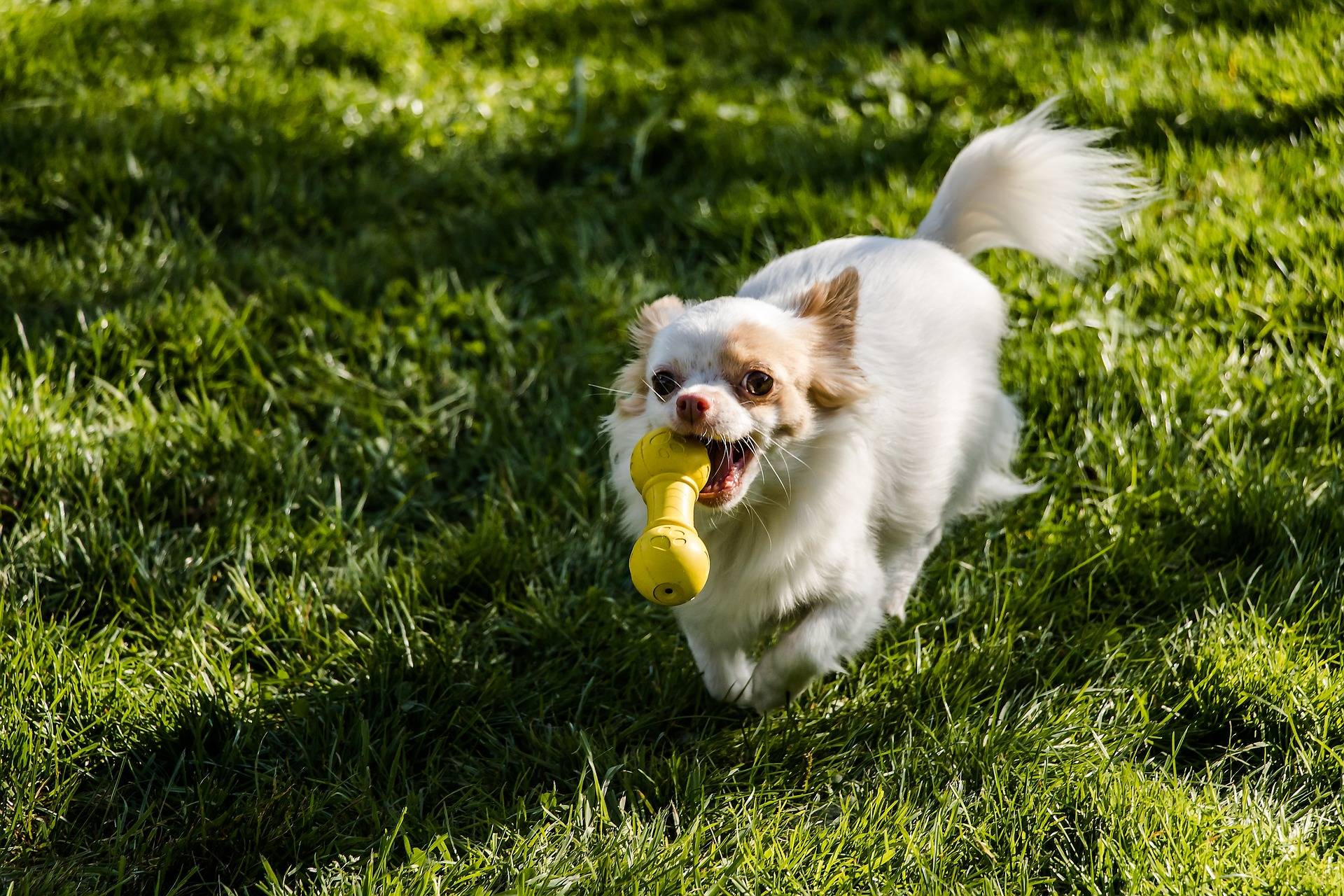 Just like the AKC recognizes both Short-Haired Chis and Long-Haired Chis as the same breed, they state that a Chihuahua will either have a deer shaped head, or an apple shaped head. Of course the Apple Headed Long-Haired Chihuahuas will have rounder heads and shorter muzzles. They may also have bulging eyes and a soft spot on their skull known as a molera. And because their muzzles are shorter, they are more prone to breathing problems and tracheal collapse.

Surprisingly, the apple shaped heads are actually listed as the breed standard and Chihuahuas that have deer shaped heads cannot be fully registered with the AKC. As the name suggests, Deer Headed Chihuahuas have a face that resembles that of a young deer. They tend to have longer skulls and muzzles, without bulging eyes. They also have longer necks and are less likely to have a molera. Additionally, Deer Headed Chihuahuas may be larger than their Apple Headed counterparts.

If you’re interested in entering your Long-Haired Chihuahua in dog shows or competitions, you’ll definitely want to get an Apple Headed Chihuahua that’s eligible for full AKC registration. But if dog shows are not of interest to you, you may prefer a Deer Headed Chihuahua because they tend to have less health problems. But keep in mind that it can be difficult to tell head shape on a puppy. So it is best to examine the parents of a litter when picking a Long-Haired Chi pup. 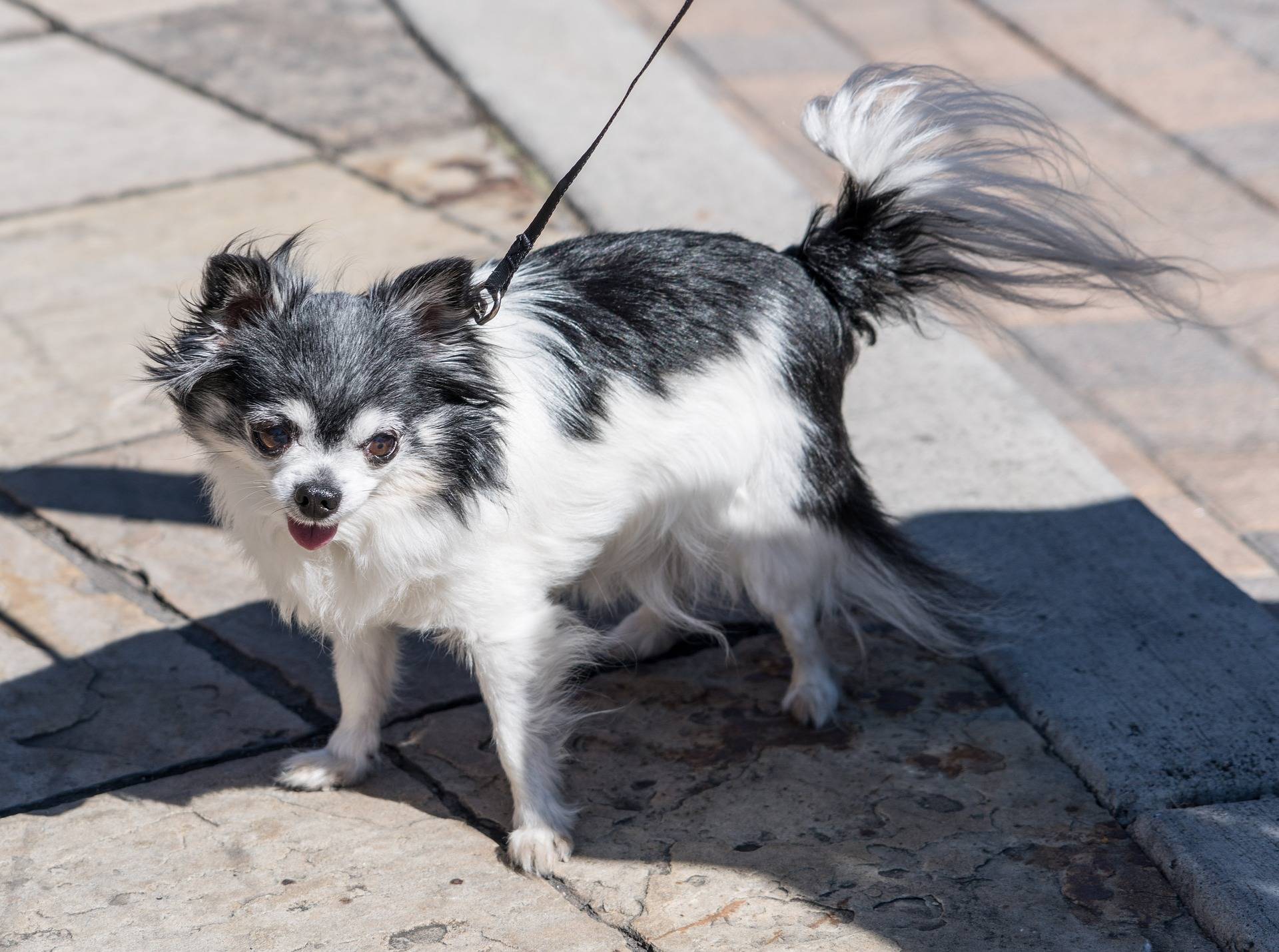 Whether your Long-Haired Chihuahua pup is black, red, tan, brown, cream, white, or any combination, one thing is for certain - his coat is beautiful and requires special attention and care to stay that way!

To keep the long hair from matting and becoming unmanageable, be sure to brush your pup at least twice a week. This metal-bristle brush helps remove mats, detached hairs, and reduce shedding.

Unlike other high-shedding dogs that tend to leave single hairs all over the place, the   Long-Haired Chihuahua has a unique shedding pattern. They shed in small, easy to clean clumps. But, beware during bathtime! The thick hairballs can clog your drains. Just be sure to brush your Long-Haired Chihuahua well before his bath and all should be well. Between baths, spot clean your Chi with a damp cloth, as frequent baths will dry out and damage his skin. 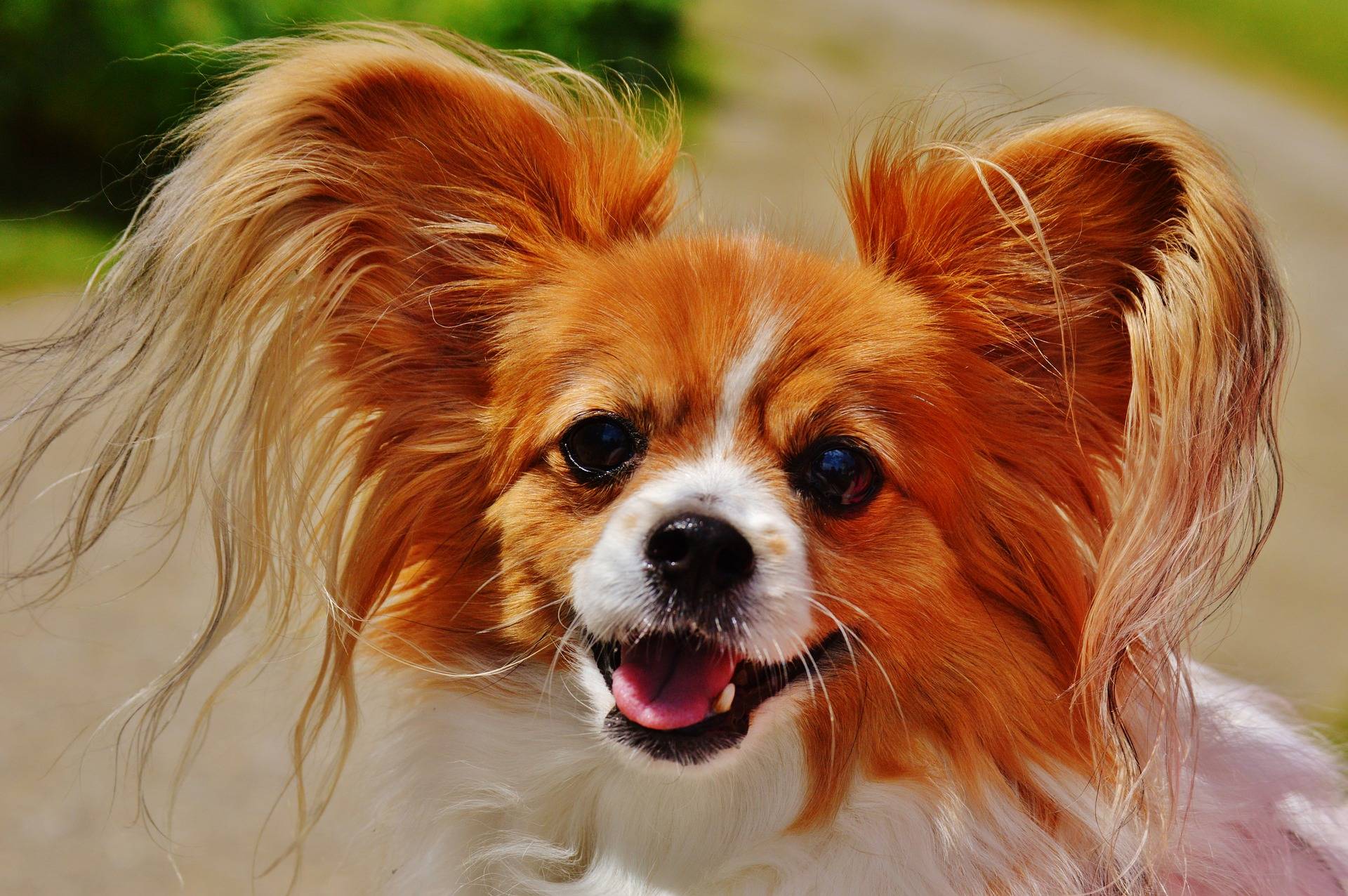 Summary: Is the Long-Haired Chi For You?

If you are looking for a small pup with lots of love to give, we hope we have shown you the perfect breed!

Long-Haired Chihuahuas come from a long line of feisty hunters and have the big attitudes to prove it. But, with consistent training, they’ll make the perfect lap-dog.

Chis thrive on attention, petting, and do not do well being left alone. You will need to devote a lot of time to your new pet. So, the Long-Haired Chihuahua may not be a great option if you are away from home a lot or have small children to tend to. But if you do decide to take in Long-Haired Chi, this tiny pup will certainly take up a large space in your heart.

Do you have a Long-Haired Chihuahua? Share a story in the comments!

Looking to show off your Long Hair Chihuahua? We’ve put together a list of recommended products below. 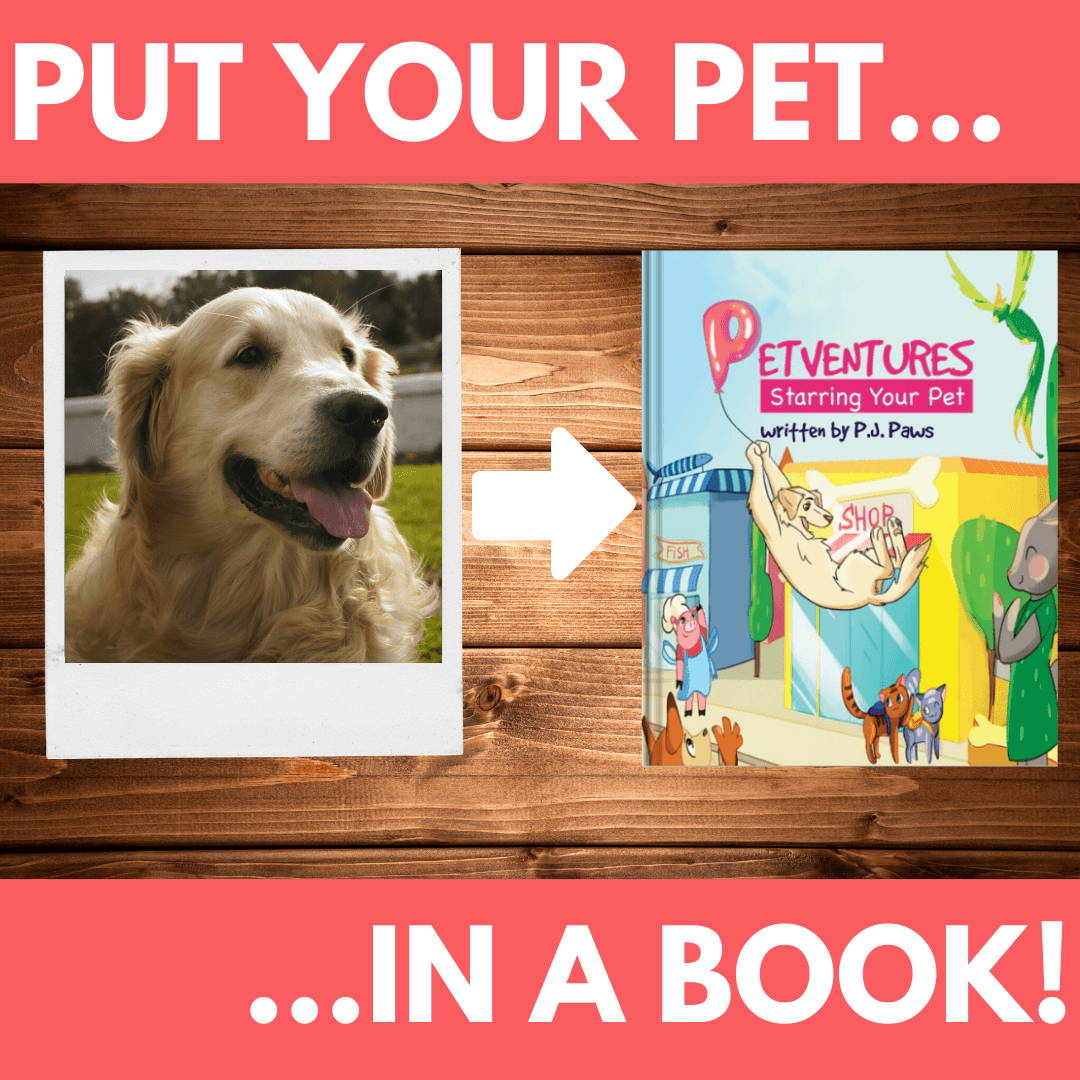